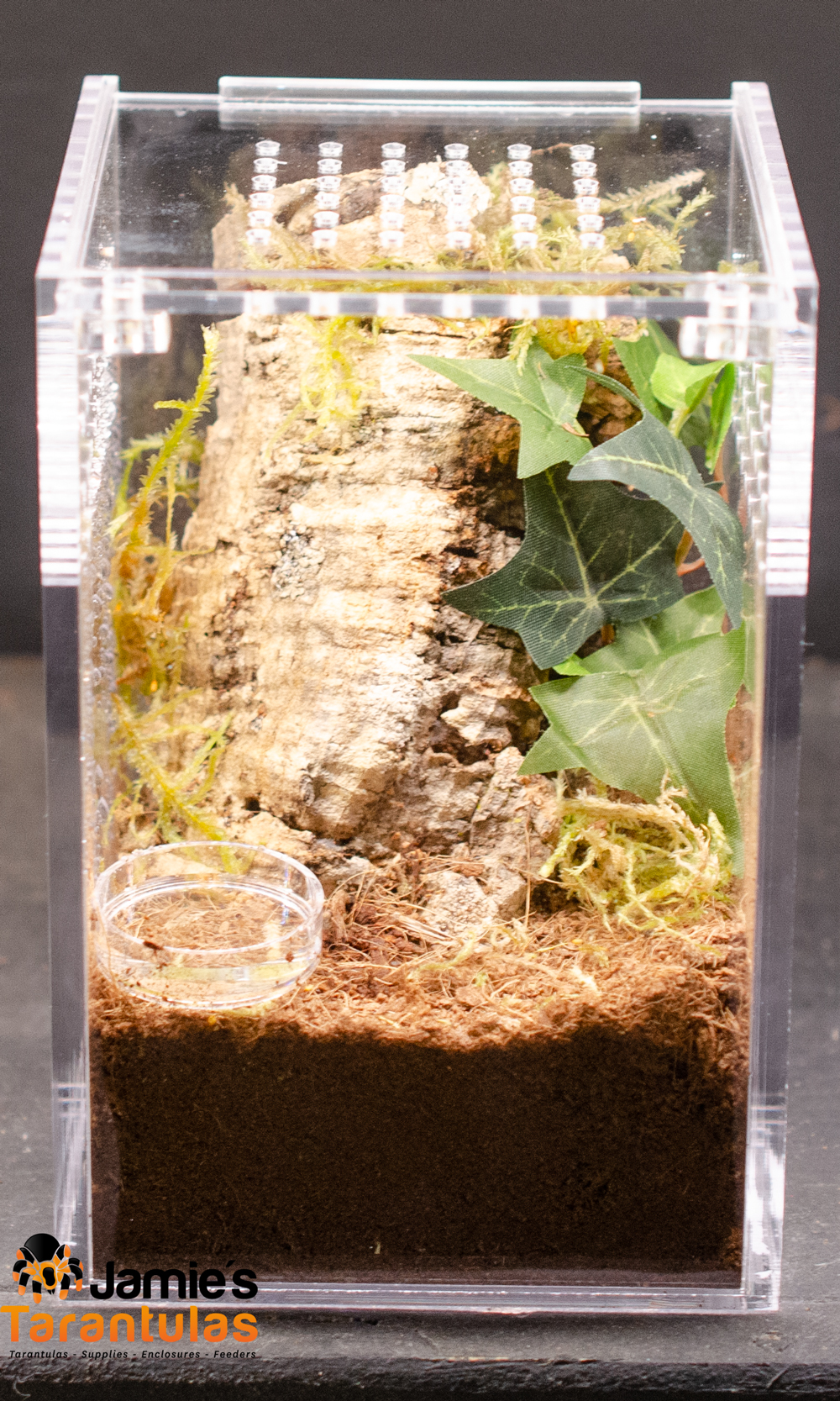 Written by admin on 25 February, 2022 in Main
For this tutorial we’re going to build an Arboreal/Fossorial Mag-Terra Kit for a spidering/juvenile Poecilotheria metallica (Gooty Sapphire Ornamental)

As many of my customers have mentioned they do not have a hot glue gun so we will be assembling this kit without one.

The most common question I get with the Mag-Terra is: "What is the difference between the Arboreal/Fossorial and Terrestrial kits?"

-Cocofiber - The Arboreal/Fossorial includes one bag of cocofiber substrate while the Terrestrial has two bags.

-Cork Bark -The Arboreal/Fossorial includes a larger, flatter piece of cork bark while the Terrestrial has a smaller, half-round cork bark piece.

These subtle yet, big differences cater to particular types of tarantulas. Arboreal/Fossorial specimens will appreciate the space behind the cork bark flat to make their home while the terrestrial specimens will often use the half-round as a starter burrow. 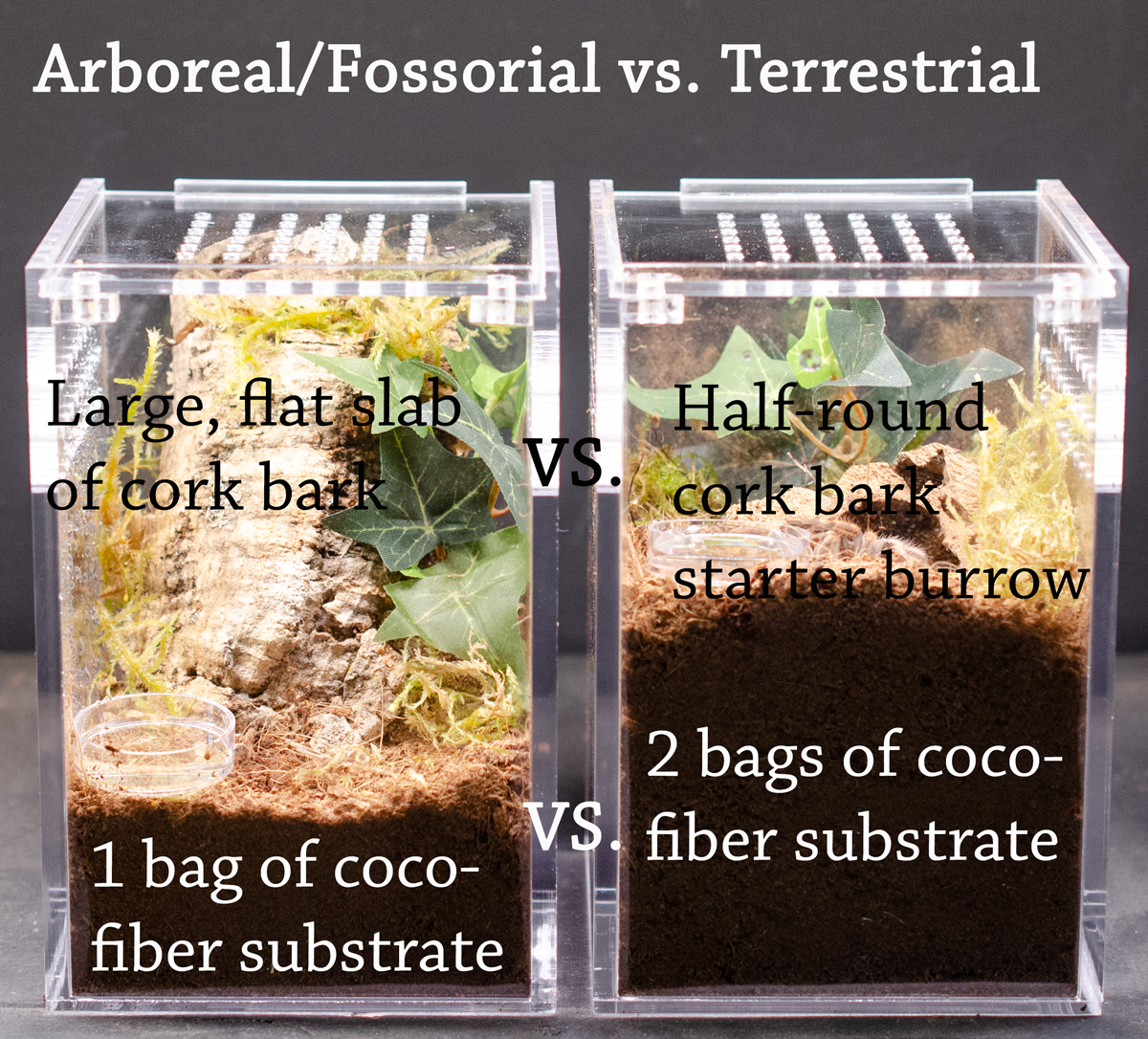 As Poecilotheria metallica is an arboreal/fossorial species we will be using the Arboreal/Fossorial for this particular specimen.

To be fair I went and grabbed the Enclosure Kit closest to me off the shelf. None of the elements were added or made specially for this article and accompanying photos. This kit was manufactured for sale to a customer. 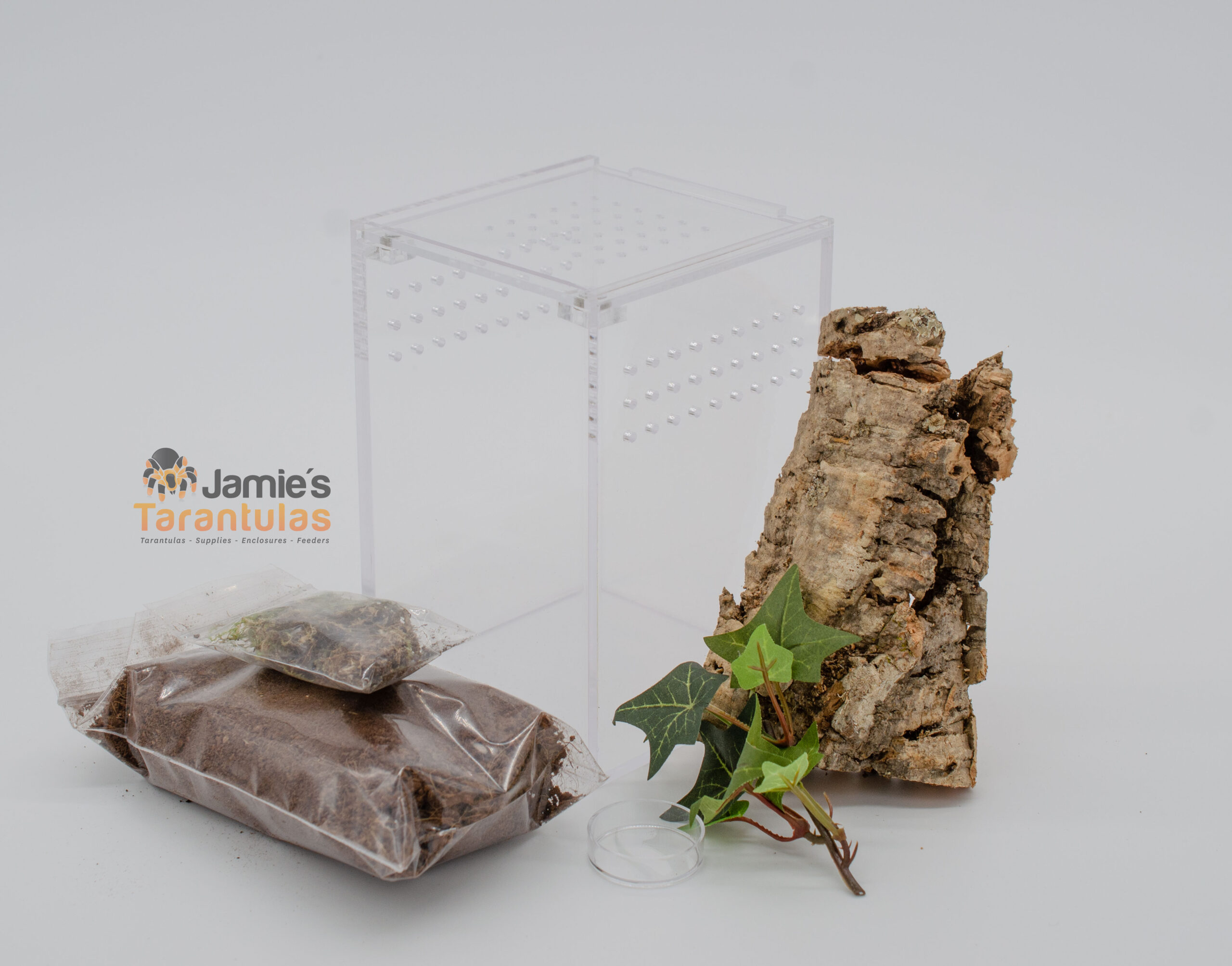 It did include a larger piece of cork bark and to be honest I do prefer one a little smaller then this but, this is my personal ascetic preference. The spider doesn't care either way. 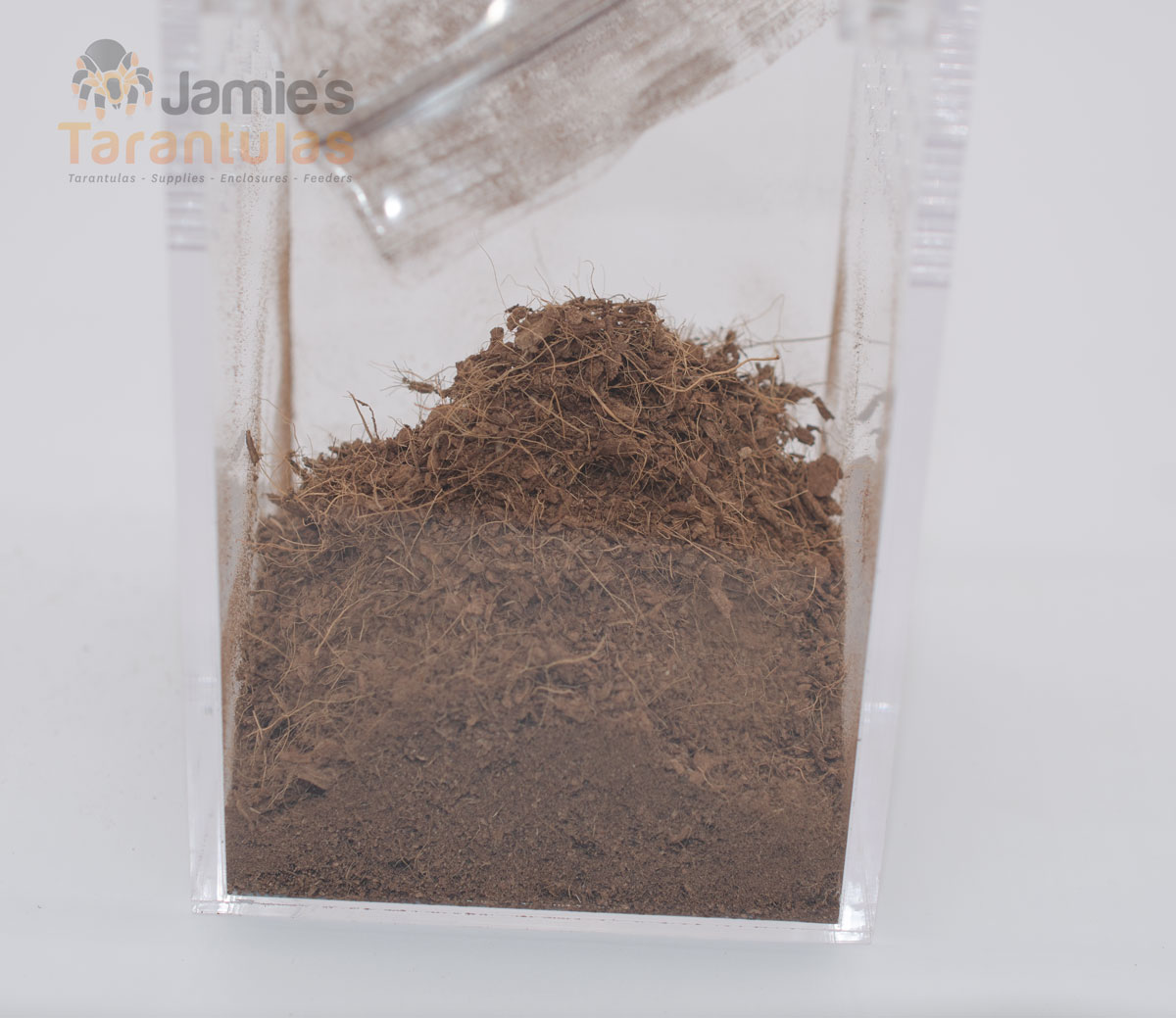 Next, add the cork bark. 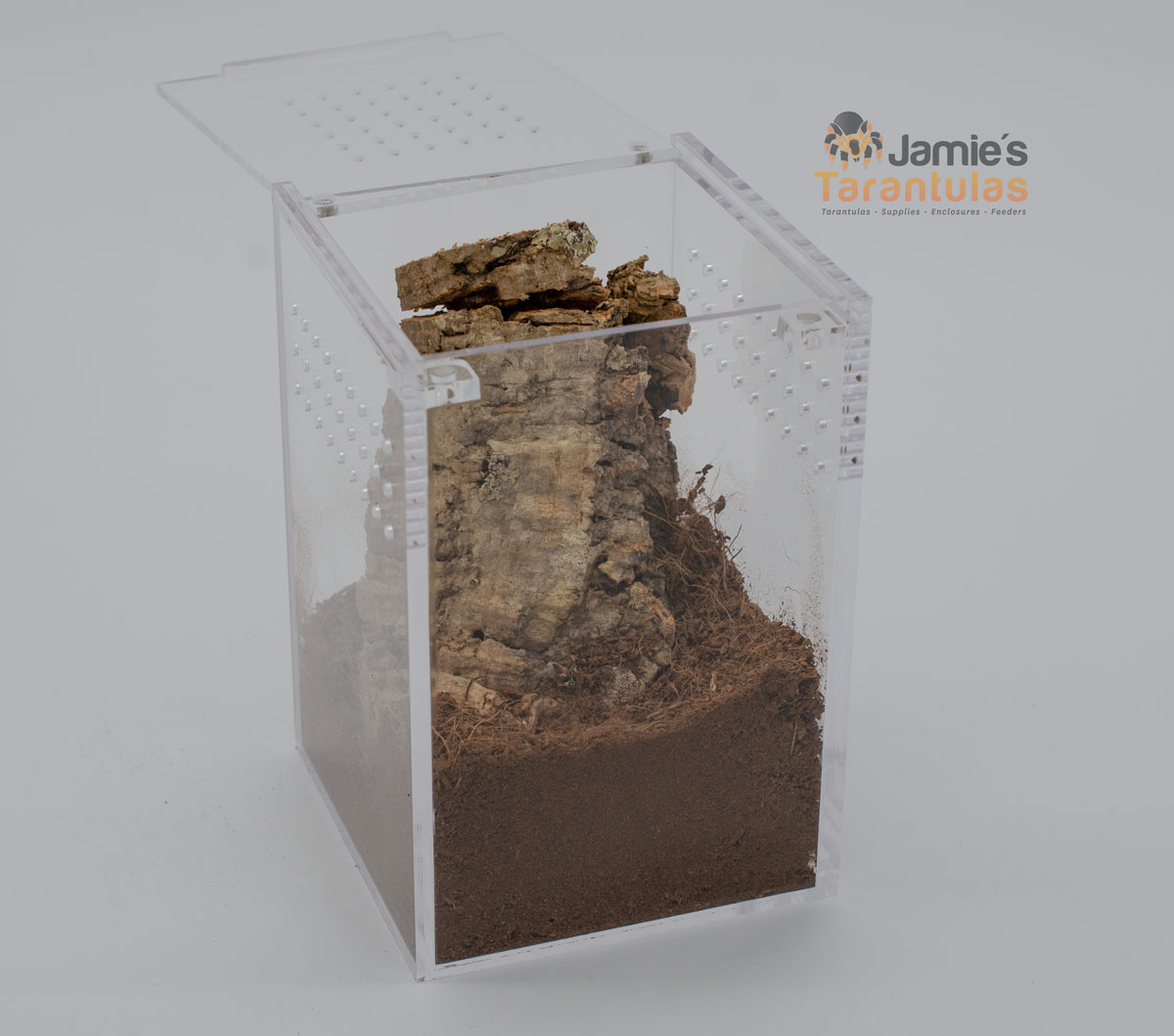 Some might argue to add the cork first. This is easier but I don't prefer this as I get coco all over my cork bark. Again, personal preference. The tarantula is not going to worry about this either way! 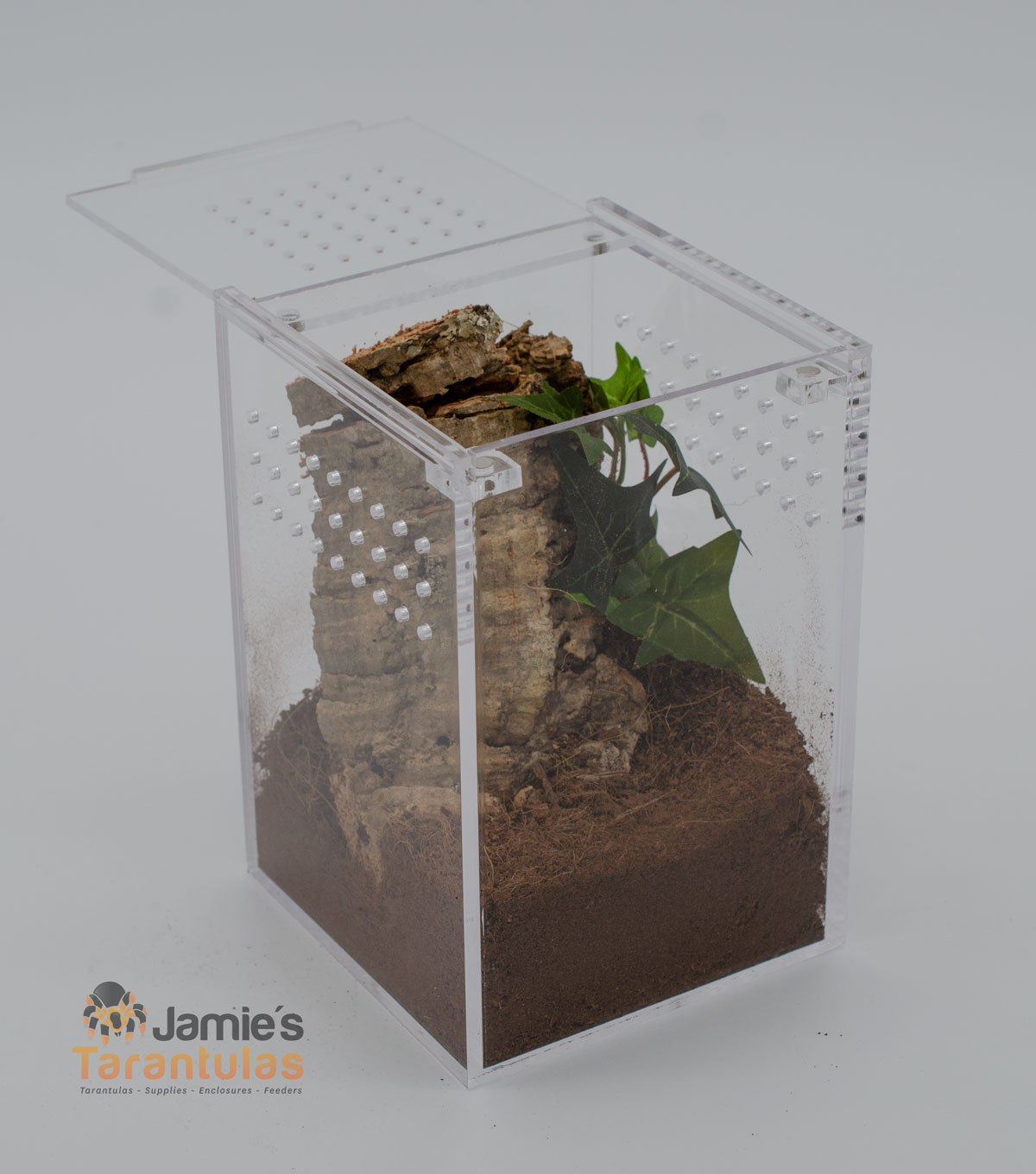 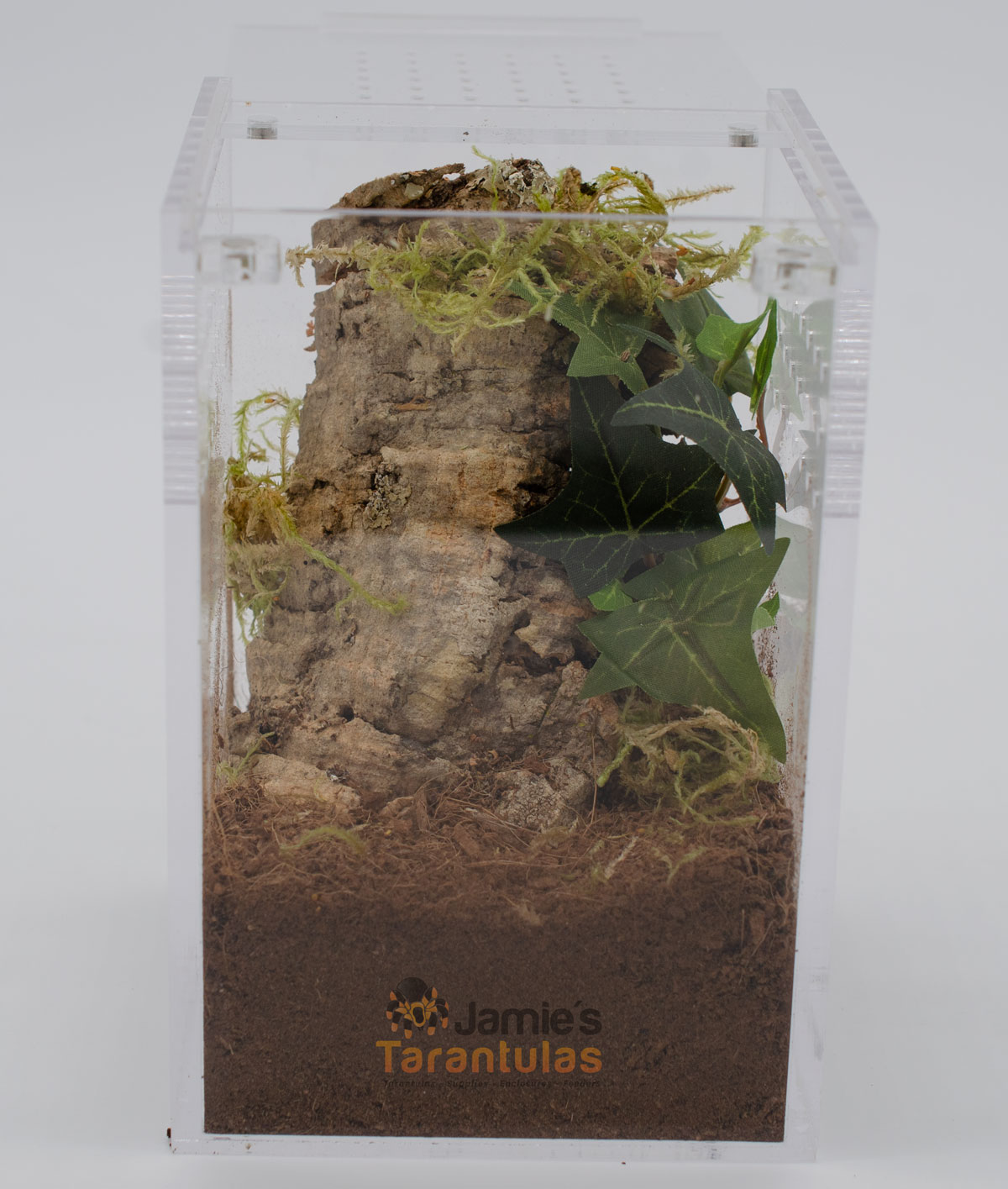 Add the water bowl and fill with RO, purified, or (tested) spring water. 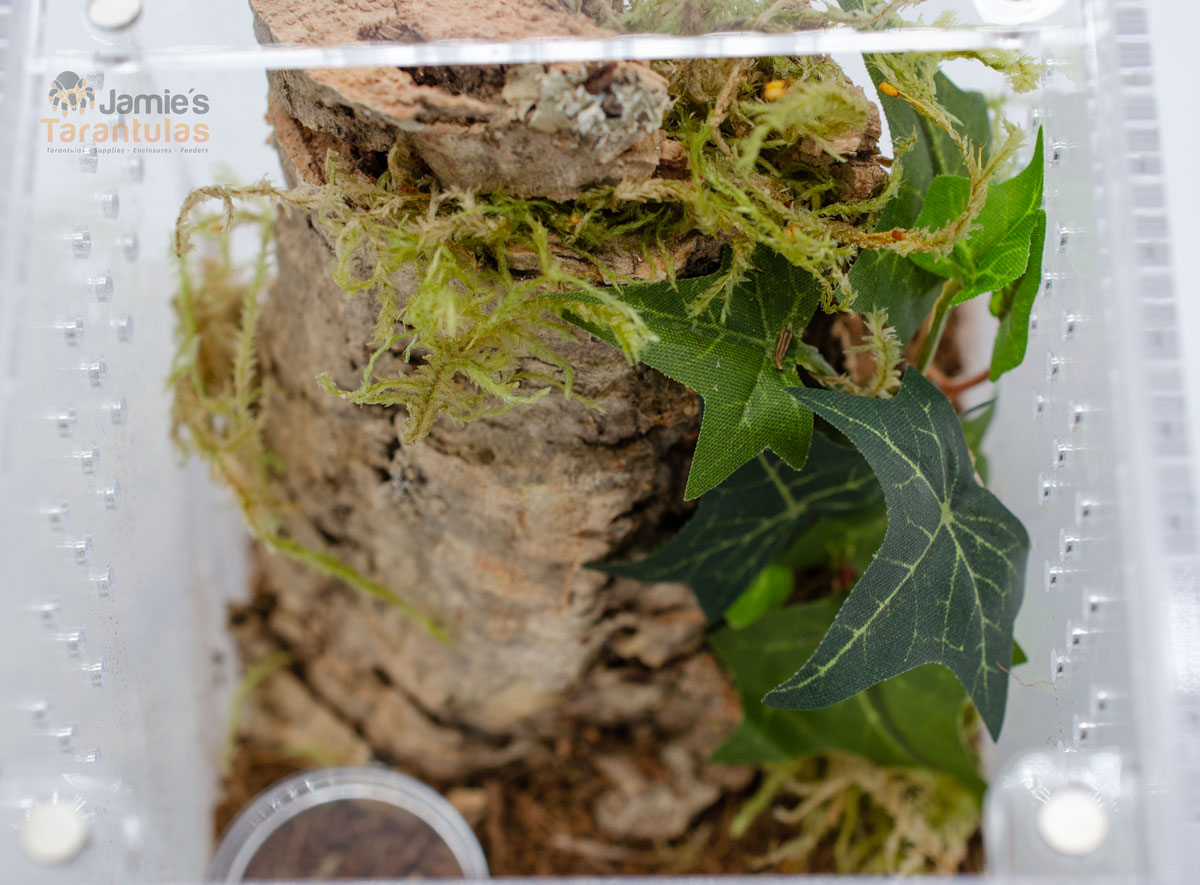 It is good to give the enclosure a mist on one side so the tarantula can drink the "dew" off the walls. This is especially important with tropical species such as Poecilotheria metallica. 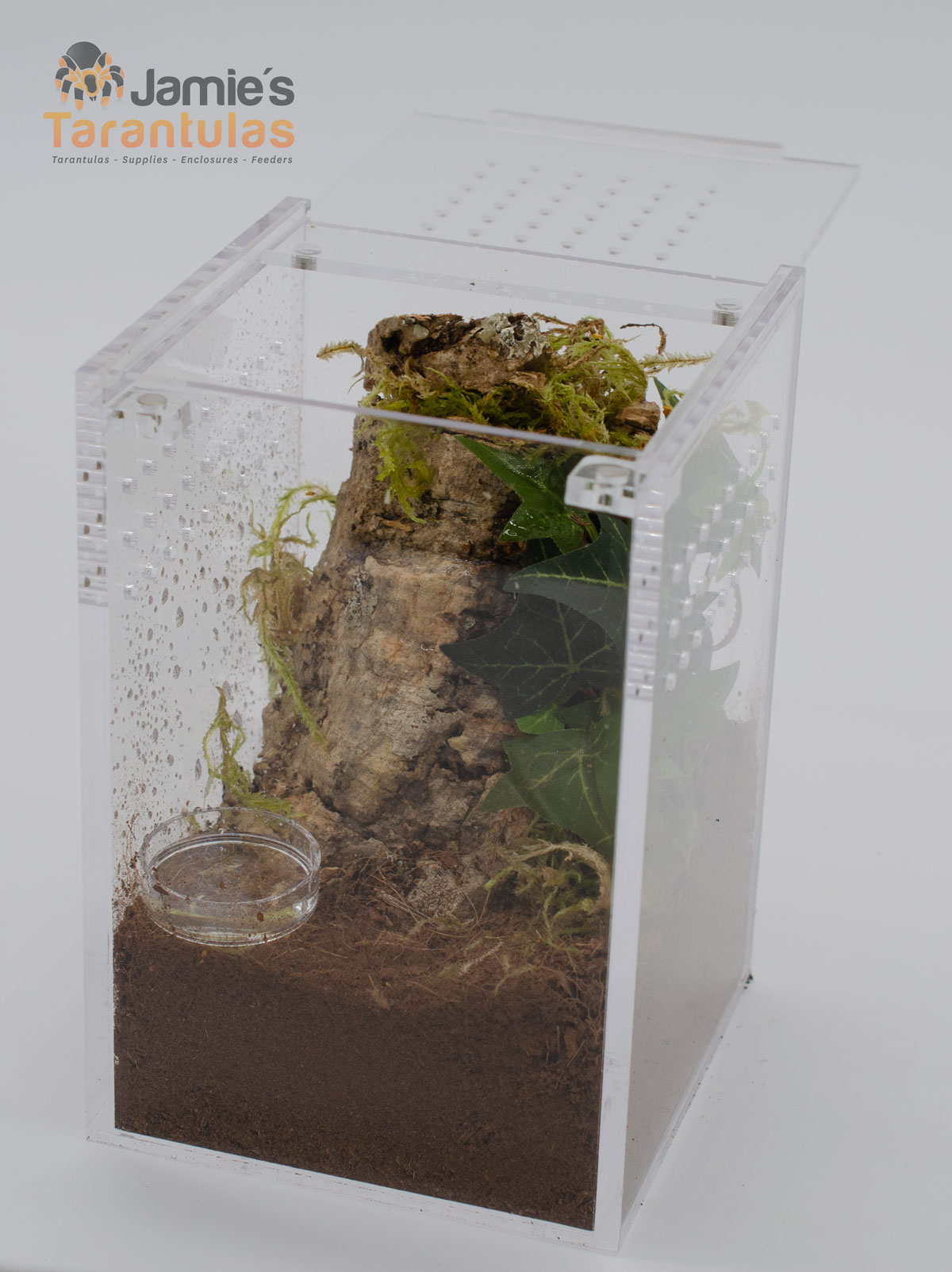 You'll want to repeat this regularly as part as your husbandry routine. 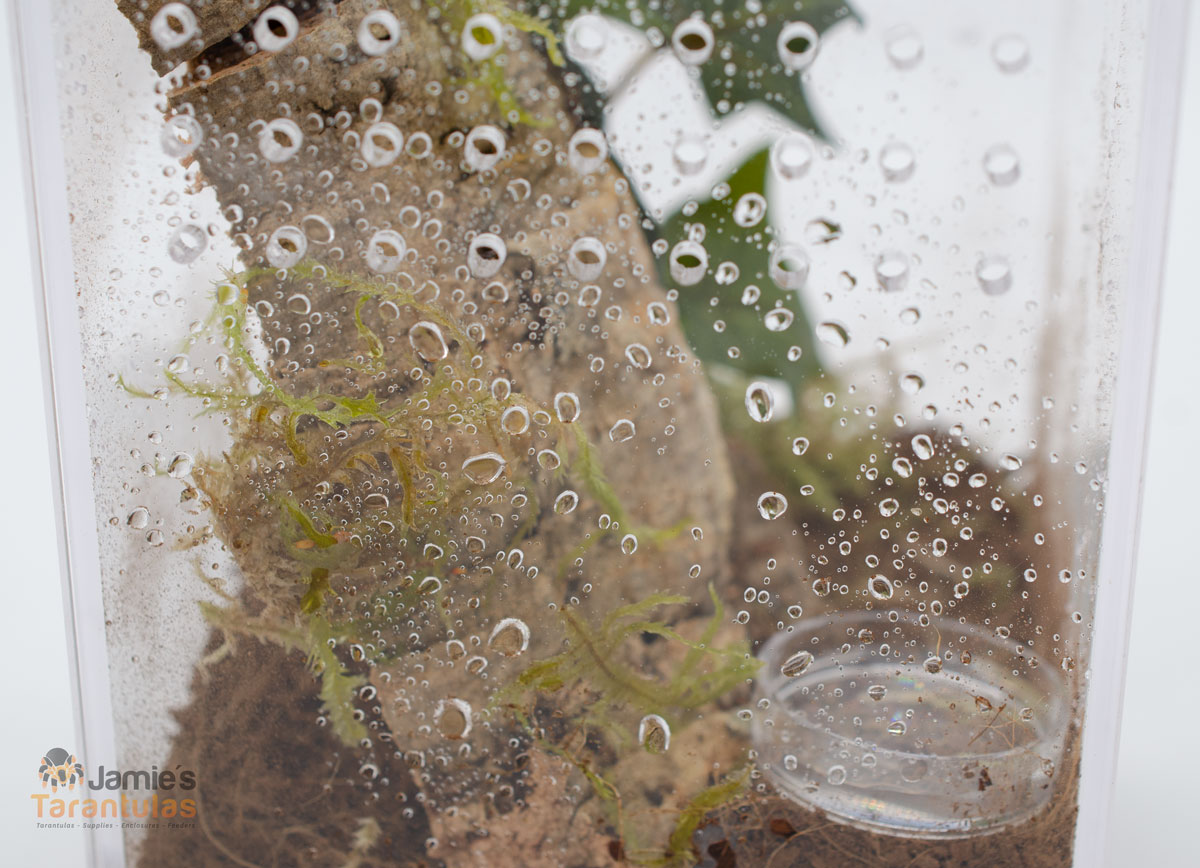 And now the exciting part...adding the P. metallica! 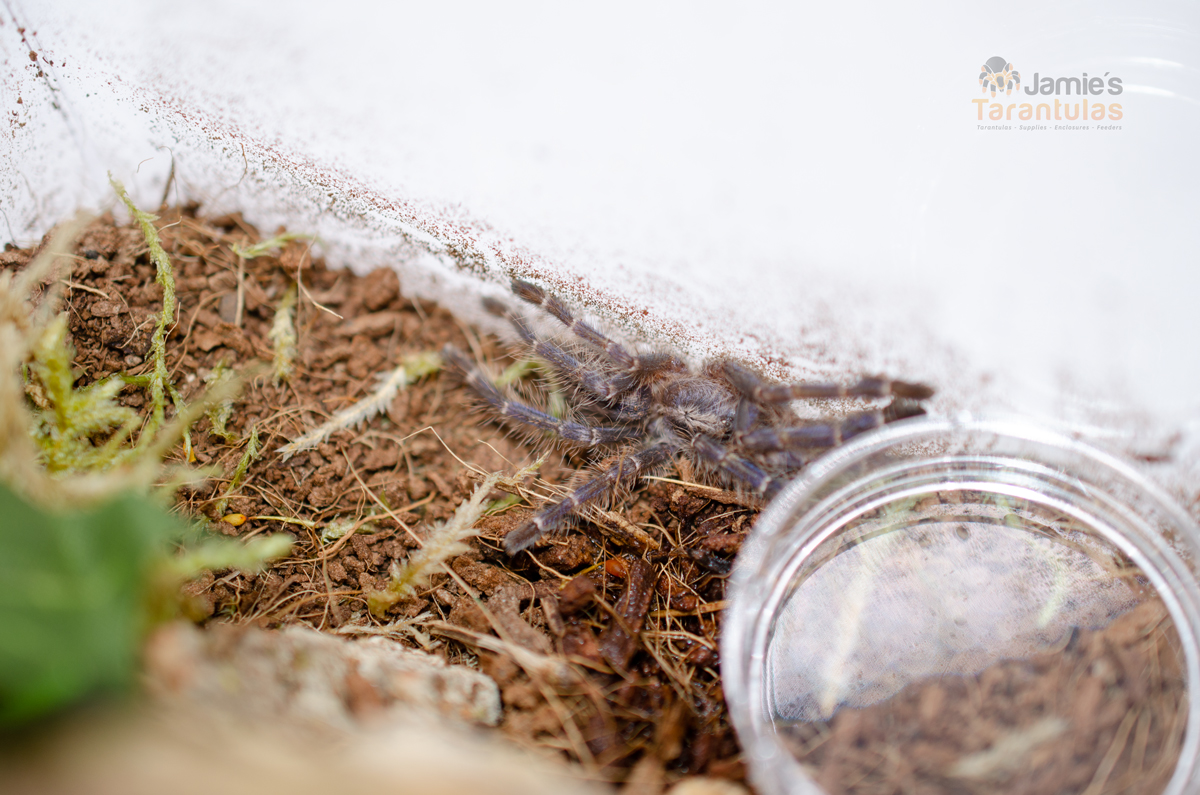 This little spiderling/juvenile was not very interested in posing for the camera and quickly disappeared under the foliage. Currently the little one measures about 1 1/2" DLS. 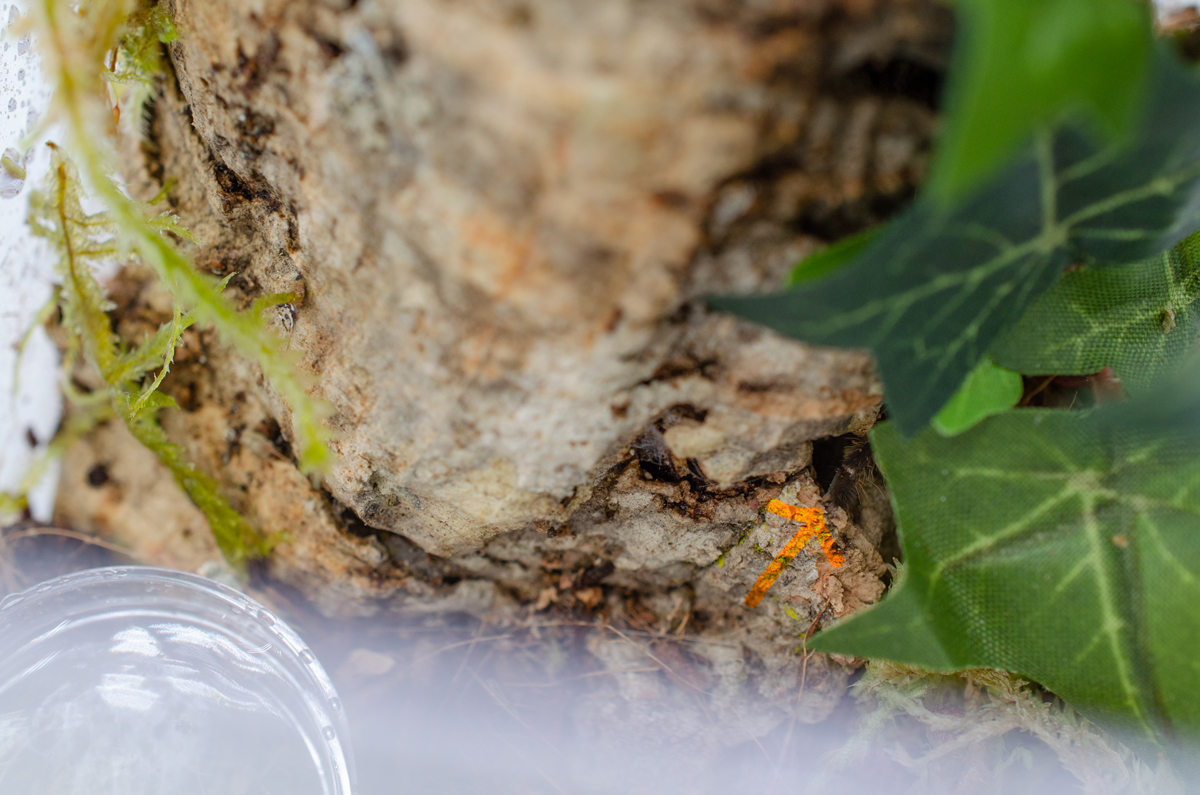 Can you see where P. metallica went? Hint: look at the arrow. You might be able to spot just the foot and a bit of the leg.

I don't want to disturb the little one for at least a week. It has been in it's previous enclosure about a year so I am sure it is disoriented and needs some time to adjust.

It will be exciting to see how over the course of the next few weeks P. metallica makes this little house it's home. We will post and update soon!