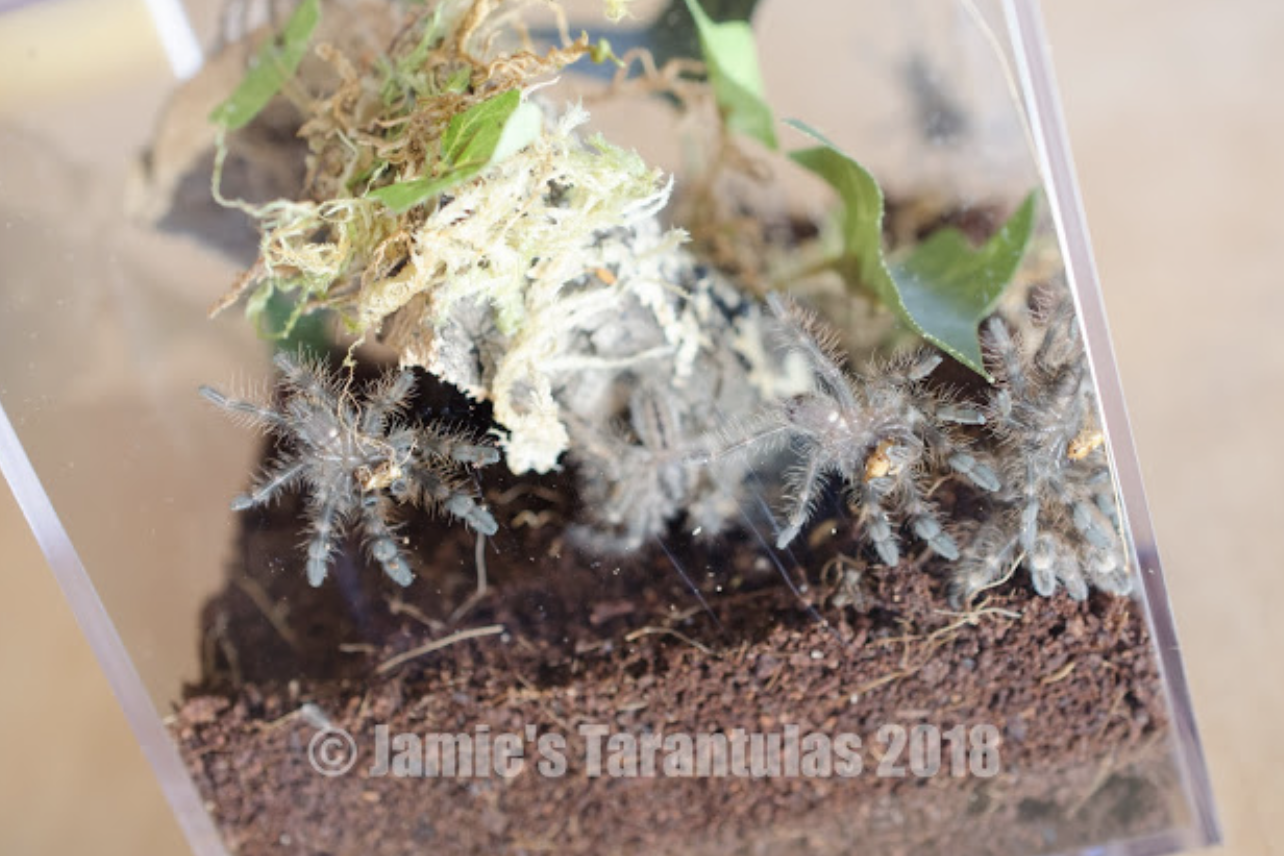 Want to start a tarantula communal? Here are some basic communal tips

Want to start a tarantula communal?

Here are some basic communal tips:

-Not all tarantulas species can live communally. In fact most can not (you'll just end up with one, big fat tarantula) I am currently keeping communal enclosures of M. balfouri, N. incei, P. miranda, P. metallica, Poecilotheria Highland & Poecilotheria Lowland.

-Even so, some communal species tolerate each other better than others. I personally wouldn't recommend trying an Avicularia species communal.  N./H. incei I have had more losses overall than my Poecilotheria and M. balfouri communals, and many customers repot similar experiences. M. balfouri tend to do quite well together in fact, I would go as far to say I think they are happier when kept as a proper communal. I rarely bother separating groups of M. balfouri as I can reliably keep them together with little to no losses. Most Poecilotheria are do well together with P. ornata being an exception.

-A bigger enclosure isn't necessarily better when doing a communal. You want the tarantulas to share a common borrow/tube web structure rather than try to steak out their own, personal territory.

-Make sure they are fed and misted often but not so much there are feeders constantly running around the enclosure (This will only make them stressed!) We feed our Poecilotheria sp. Lowland communal about once every five days only as much as the slings can catch in a few minutes.   Not all tarantulas in the commune will want to eat every meal.

-I typically recommend starting a communal with 4-5 specimens although due to popular request (and my curiosity) I have been doing experiments with smaller groups and pairs. I have even had success rearing two M. balfouri together, as well as two P. miranda together both from 2i to about 3" DLS. Keep in mind I am still experimenting with smaller communal set-ups and stand by my 4-5 specimen recommendation for those new to keeping tarantulas communally.

-If possible start your communal with tarantulas already familiar with each other/living in commune. Keep in mind starting with specimens who have been separated for some time can and often will result in one, very fat spiderling. If you're ordering tarantulas from us and plan on doing a communal with the group please ask our opinion first. We may or may not recommend against it. We'd rather loose your business then have slings lost as a result of poor planning! If we are offering a "communal special" this means the specimens available for purchase are currently housed together.

Here is an example of one of my larger communal setups. I saved a lucky group of 13 from the original communal enclosure of about 36 to set up a communal for my personal collection.

I rehoused that bakers dozen of our Poecilotheria sp. "Lowland" spiderlings into a Terrestrial Juvenile enclosure kit. Here they are enjoying their first meal in their new home! 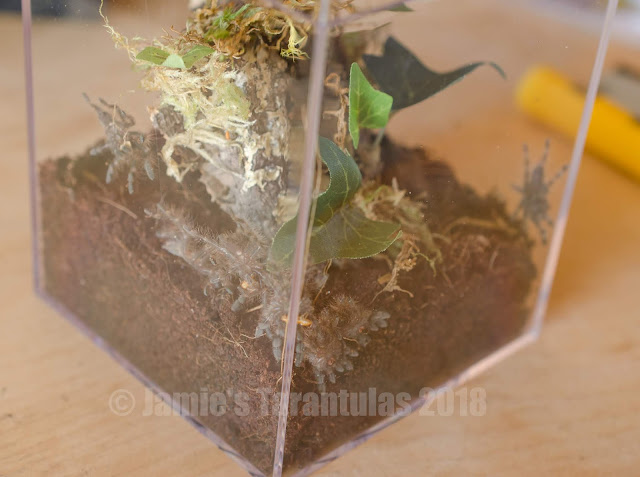 It is fun to watch the Poecilotheria sp. Lowland take prey. They will touch the prey before attacking it to make they're not accidentally going after a sibling. 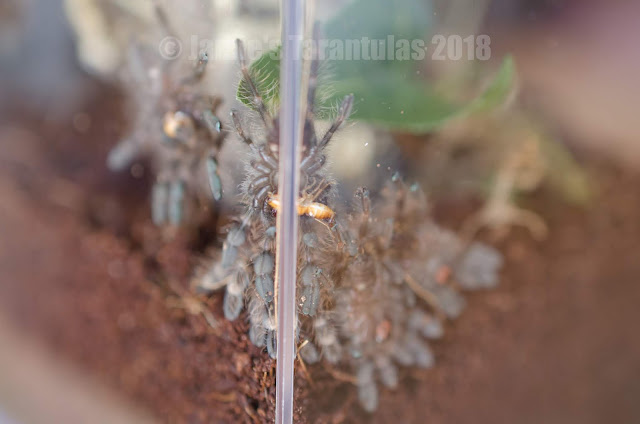 Although in the photos they were just rehoused into a new enclosure these Poecilotheria have been living together peacefully since 6-6-18, that's over two years! I will need to rehouse them during the holiday closure as they are 2" or over, too large for their Terrestrial Juvenile Kit! Stay tuned for an updated re-count and re-house article! 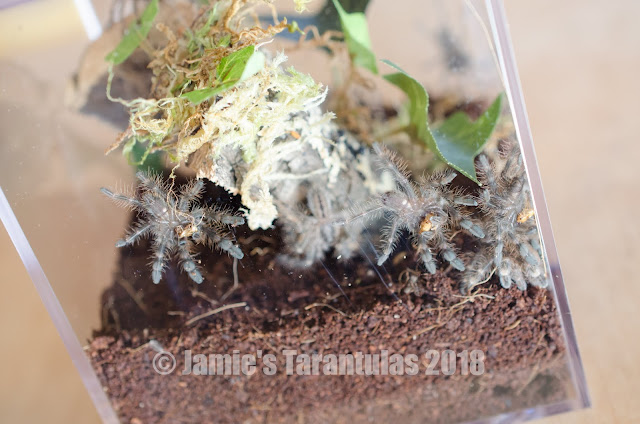 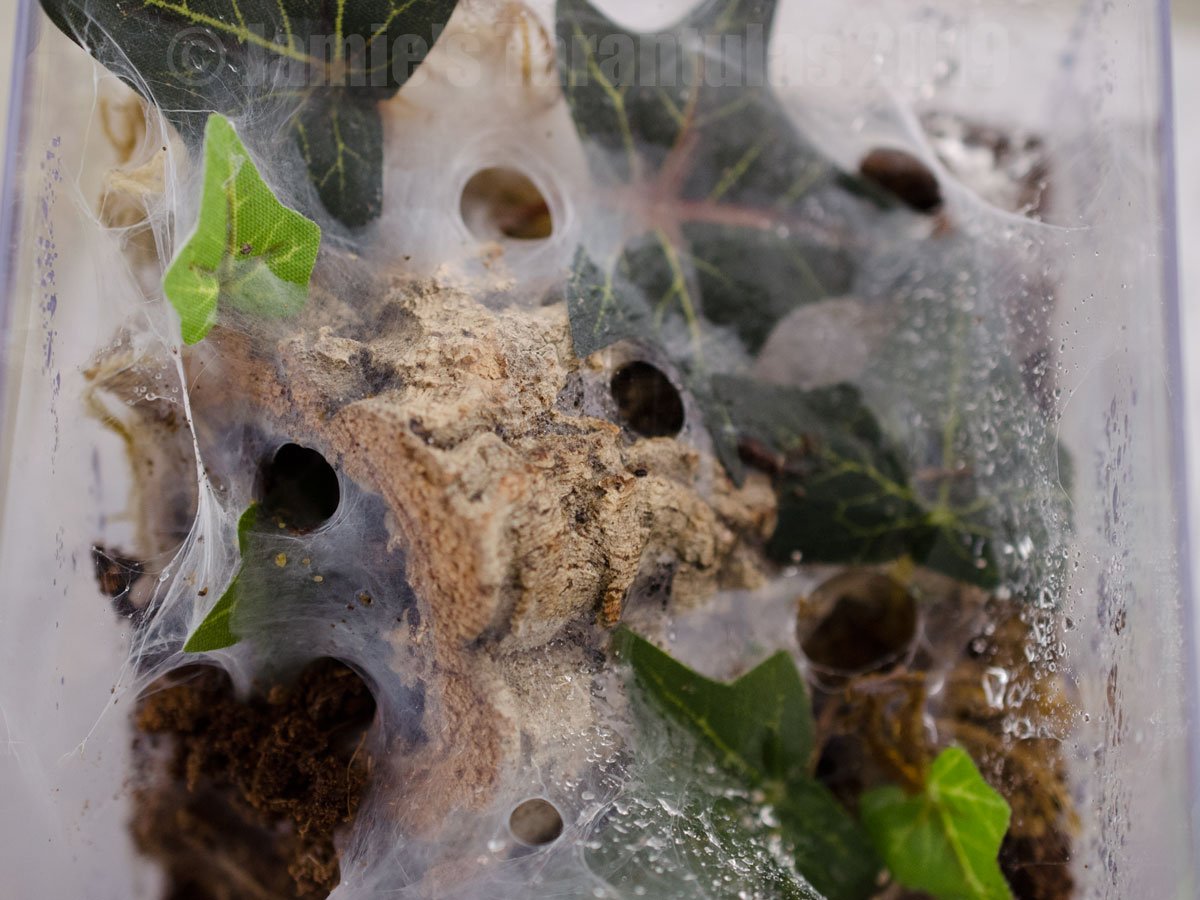 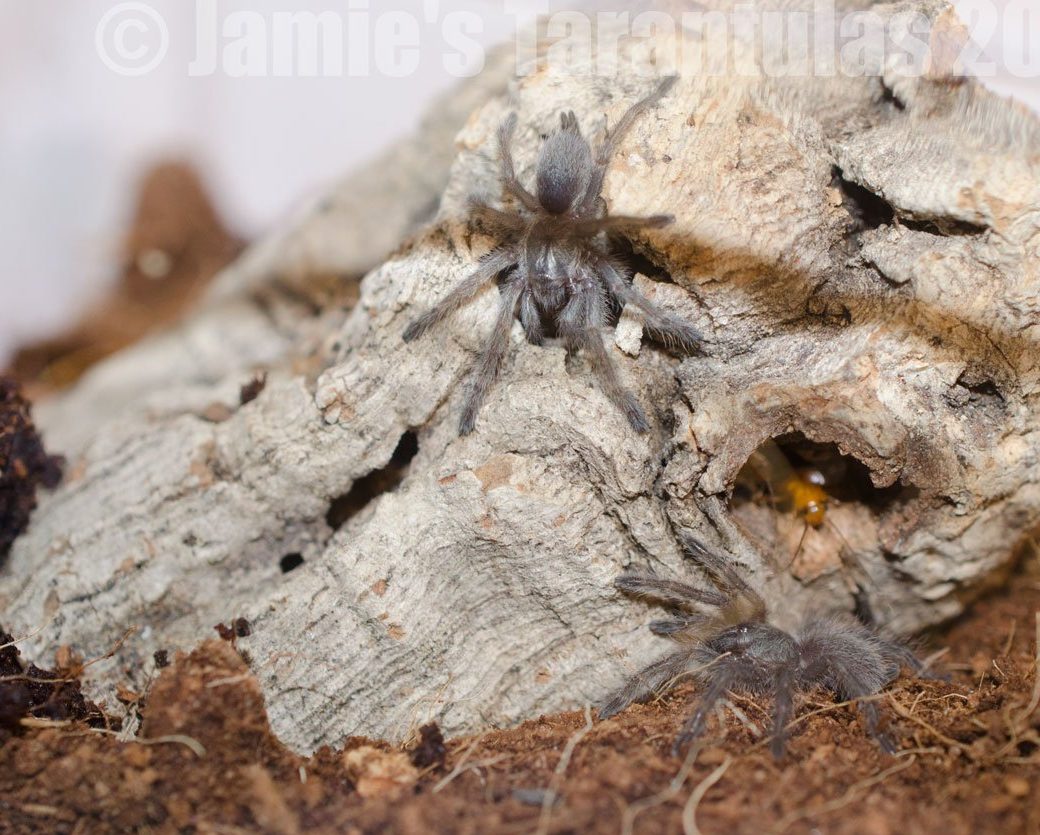 Your email address will not be published.
Required fields are marked.
©2021 Jamie's Tarantulas
All Rights Reserved